Long-duration manned space missions pose important questions as to how to protect astronauts and plants used as food from the effects of charged-particle irradiation in interplanetary space. In these studies we are investigate using various biological indicators effects such as  the influence of radiation on root tip growth as well as the effect and mortality of animal tissues.

In this project which in carried out in collaboration with the Department of Applied Radiation and Isotopes at Kasetsart University Bangkok, the spatial distribution of Hg in amalgam at the amalgam/enamel interface and the biting surface are investigated. A number of different teeth are with different types are being investigated in the MeV ion microscope using PIXE to characterise the elements. Colocalisation is used to identify regions of different amalgam phases. 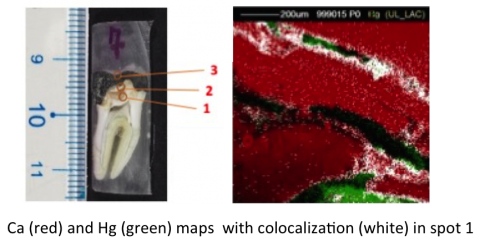 Apple snails (Pomacea maculata , superfamily: Ampullarioidea)  are an invasive species in Louisiana. They inhabit fresh water and grow rapidly.  In this research we are measuring the uptake of elements from the environment and how they are deposited in the growth rings of the operculum and shell. The ultimate goal of the research is to develop a monitoring tool to provide a bio-chronological method to map how concentrations of  heavy elements in the fresh water are correlated in time with surges in discharge rate of  fresh water into rivers and lakes due to e.g. storm events.

The radiation doses of interest for testing charged-particle (mostly proton) irradiation in space in low-earth orbit and deep inter-planetary space are in the range 1 mGy–50 Gy in a year. By exploiting that for fast charged particle most of the dose is deposited in the Bragg peak where the charged particles have slowed to a few MeV energy, it is possible to perform testing with few MeV protons.  The proton fluxes required lie in the range 106–109 3 MeV protons cm-2s-1 which is extremely low compared to the typical fluxes of 1011–1014 protons cm-2s-1 for conventional ion implantation with an accelerator. In order to achieve such low fluxes a microprobe with a fixed beam is being developed that can deliver external focused beams as well as extremely low fluxes of ions for space charged particle simulation. The low fluxes are achieved by using small aperture sizes in the microprobe bringing the ions to a focus as in Abbe’s critical illumination condenser, where the ions are allowed to diverge after the conjugate focus to give a divergent beam with a low uniform flux of ions. Dosimetry is done by monitoring the rate of backscattered ions from a membrane target place in front of the sample.

The external beam is directed into a glove box so that the tissue samples for irradiation can be handled under BSL-2 level conditions. The figure below shows the new low-flux irradiation end station during commissioning. 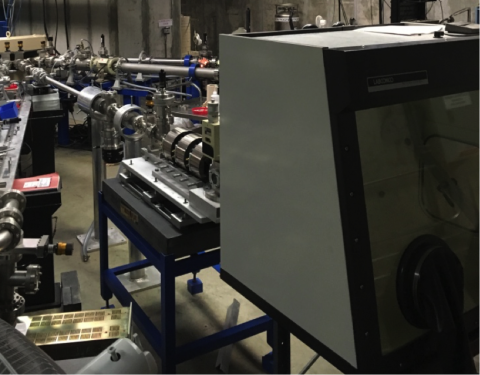 In Time-of-Flight–Energy Elastic Recoil Detection Analysis (ToF¬E ERDA) the time resolution has hardly improved  from ~250 ps FWHM since the first introduction of this multi-dispersive analysis method since in 1987. An in-depth investigation of the underlying factors that govern the time resolution is being implemented with a view to developing third generation time pick-off detectors that not only have an improved time resolution, but are cheaper to implement and have better Ultra-High vacuum (UHV) compatibility. Making them better suited for analysis of thin-structures within a few nm of the surface.  The in-depth study has revealed numerous improvements can be made and an improvement in resolution with a factor 2-3 is quite possible.  In particular concerning the electron optical design, which can reduce ion energy spreading from the tandem effect and after-pulsing due to secondary electrons as well as perturbations due to field distortions in the vicinity of wire harps. Other improvements can reduce the shape variations in the pules from the anode.

This is an undergraduate student research project with HES-SO Switzerland. Previously, measured external-beam article Induced X-ray Emission (PIXE) and X-ray Fluorescence (XRF) data  for a range of artefacts from museums in Switzerland is being analysed. The age of the samples range from ~1860, where alumnum was produced by the amalgam process to the 1980s.  Preliminary results show that there is a significant difference in the impurity content between the artefact produced by the amalgam process compared to the lower cost electrolytic process introduced later. The results support that the compact hand-held XRF that are suitable for use in a museum environment can be used to distinguish between aluminium produced by the chemical technique ant the electrolytic technique. Other findings are that the in the period 1900-1950 the composition of the aluminium corresponded to “commercial” pure aluminium (99 et.%) with little variation.

In this undergraduate and graduate research project, we are developing a robotics tool that can be used with a 2–axis positioner to move the sample to the desired field of interest in the MeV ion microscope. The sample can be moved to pre-set positions, or programmable steps and scan to allow collection of large field of view images that a are mosaic of smaller fields of view as well as simple jog movements to position the sample.

Improving the quantification of PIXE analysis using the GEOPIXE software

A graduate project with the Department of Chemistry at UL Lafayette ad Kasetsart University in Bankok. The GeoPIXE software includes a large number of features that allow quantitative elemental maps to be produced by the (CSRIO) GeoPIXE software.

While the inorganic and thin-film samples have been widely studied by ion beam analysis (IBA) with MeV ions, analysis of organic compounds has largely been neglected. In this project we are developing a MeV SIMS instrument using plasma desorption mass spectroscopy in conjunction with a MeV ion microprobe.